A taste of France hits the streets of Plymouth

At age 5, Florence Aymard began making crepes alongside her grandmother, who lived in Brittany, a northwest region in France known for the tasty pastry. The women who made them, known as the Bigouden, wore tall head dresses that Aymard said got taller and taller over time. These women were her inspiration for the Crepe and Cake food truck logo, so evidently seen on the side of the blue bakery on wheels. “I love to do crepes,” Aymard said, in her distinct French accent. 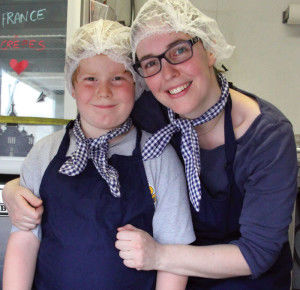 In 2014 when her husband’s job relocated to Minnesota, Aymard eagerly began planning her own business. To prepare, she became a crepe master before leaving France for their new home on the border of Plymouth and Maple Grove.

Aymard, who previously worked for General Electric in its health care division, found the idea of operating her own business exciting. “I like to do marketing and communications,” she said. She also liked the idea of being her own boss and having control over the everyday operations. Making and selling crepes was also a way for her to be creative, in addition to giving Twin Cities customers a unique food choice.

Aymard tested the Minnesota waters, selling crepes at area farmers markets, to determine if there was indeed a market for her French pastries.

After picturing a viable future in the pastry making business, Aymard looked in to purchasing a food truck in an effort to reach more customers with a

mobile restaurant and be able to serve hot crepes for breakfast, lunch, snack and dinner “or at anytime,” she said.

When she called Chameleon Concessions of Plymouth, which manufactures custom food trucks, carts and concession trailers, it would appear as if fate had interceded.

When she inquired about purchasing a food truck, Aymard was informed that the Mary Antoinette Crepes food truck just became available for purchase. “It was crazy,” Aymard said, adding it was like it was meant for her.

Last summer, Aymard began selling crepes at the Plymouth Life Time Fitness location and has since been in high demand by French teachers asking her to visit different Twin Cities schools.

The most popular of the savory and sweet crepes have been the crepe monsieur made with ham and cheese, and the Nutella and strawberry.

Follow Crepe and Cake on Facebook for locations along with a special crepe of the week, www.facebook.com/CrepeandCake.

Source: A taste of France hits the streets of Plymouth | Business | hometownsource.com